Just wondering if anybody’s gotten a text or email yet. I haven’t and it’s getting worrying. This is my first concert, tho, so maybe I’m just being overly anxious.

Nope, I haven’t seen anything

No i havent received it yet. I am trying to get a ticket for la show. I called ticketmaster and they said tommarrow around 10 to 10:30. I told them it contradicts what is said on lp site and they said to call lp which there is no number for.

didn’t get an email either

they are supposed to send an email w/ timing details & where to purchase the tickets today, but they will sent an offer code tomorrow morning. Maybe that’s why they said they would send it tomorrow.

Thats my point but ticketnaster said they that the only thing the are sending is the code tomarrow and have no knowledge of specific timing details that were suppose to be sent today.

Still waiting for the presale code too !! Ughhh this frustrating!

Has ticketmaster published prices for any city yet? Bc I need to know approximately how much to transfer on the debit card I’ll be using 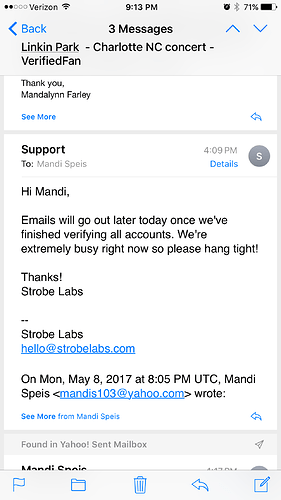 Not a moderator here but if people would just follow a single thread they would get more answers
Info will be sent out tomorrow 6am pst
Yes there’s been delays it seems
They’ll figure it out, it’s why presale seems to be delayed too

Woot woot, thanks for sharing!

what?! is this true?

Yes
As far as I can tell and from what others are saying, Strobe’s just had a more difficult time than expected sorting through. Lorenzo emailed someone saying they would send out the emails at 6am tomorrow pst. Strobe may or may not send emails later tonight. Strobe website has been changing dates and times since the start so I have no idea in regards to that. All I’m saying is presale will probably start later than expected tomorrow because of all the confusion
Just hang tight and wait for official word
Pretty much all I meant to say was to work together to get a clearer picture of what everyone’s been told instead of sprouting new threads every hour adding to the confusion. If anyone has other information they’ve come across add it here and go from there.

Tickets go on sale May 12 at lprk.com

and this is why there should only be one thread

Where is everyone in the pre-sale line? Linkin Park Live

How bout we help out a fellow LPU-er?! Contact Strobe at hello@strobelabs.com and make them reconsider @gcsorich’s position. I know if it was me id hope people helped me out with a simple email. Getting bumped from a meet and greet like that would suck. If she’s got her proof then help her get her chance and show just why Linkin Park fans are the best out there.