Background: I’ve been an LPU member for 13 years. Because of a combination of receiving a gift membership at one point as well as a couple 30-day free trial codes I’ve extended my membership with here and there, my LPU account always expires over a year after the launch of each new LPU year. For example, my LPU 14 membership didn’t expire until December of 2015, even though LPU 15 launched in November of 2015. As a result, I always end up renewing right at the end of each LPU year, right before the new one launches.

The above situation has never caused an issue with renewing my membership before, so on November 8th, with the news from Lorenzo that people should renew for their LPU 15 bundles if they haven’t already since LPU 16 would be launching soon (https://twitter.com/lorenzoerr/status/795382265727418369), I renewed my account. No issues with payment going through, got all the usual confirmation emails, etc.

My first indication that something strange may be going on happened when LPU 16 launched. My receipt, which had previously listed an LPU 15 bundle, now suddenly had changed to showing an LPU 16 bundle at the top of the order, despite the fact that the individual items listed below were still the LPU 15 package items. Screenshot: 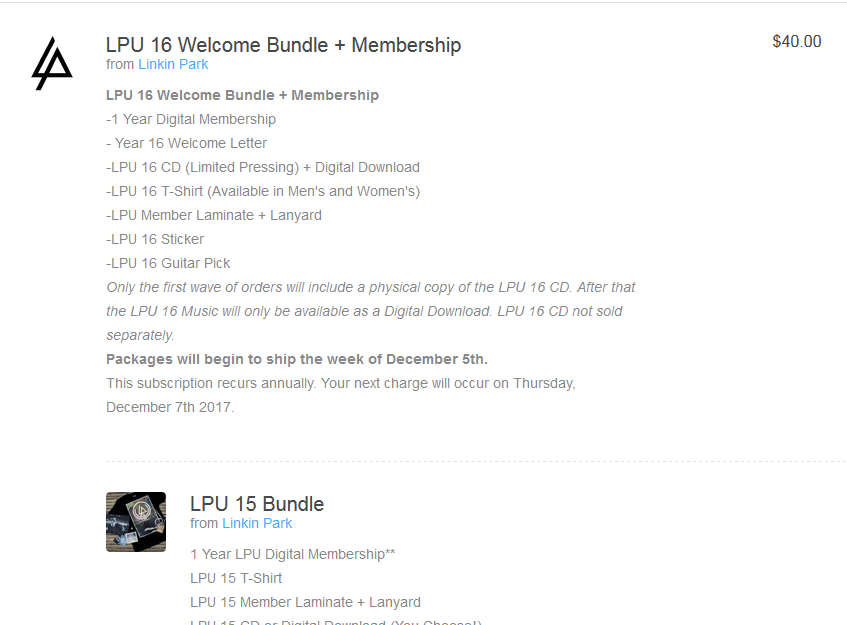 Still, I figured this was probably just a weird little glitch with things switching over from LPU 15 to LPU 16, and that since the individual items were still the correct ones, everything would be fine.

At some point in the last couple days of November, Lorenzo sent out a Tweet (that strangely seems to have been deleted) saying that LPU 16 packages would begin shipping the first week of December. I asked him if remaining LPU 15 packages would be shipping out at the same time, and while he said yes, he also said “everyone who ordered so far will get a CD” in reference to the LPU 16 limited edition CD, which makes me think he didn’t understand I was referring to the PREVIOUS year’s package for some reason. Screenshot: 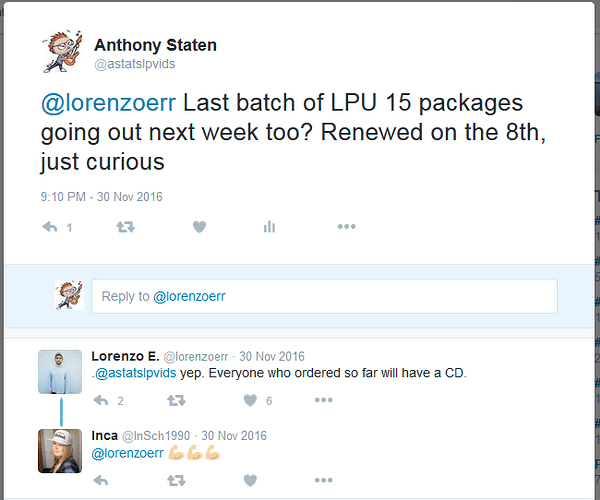 651×542 47.8 KB
Still, I figured if the LPU 16 packages were going out, my LPU 15 package which had been ordered two weeks before LPU 16 launched would surely be going out at the same time.

So I waited, and waited, checking my receipt status every few days…and all of my items were still listed as “This item has not shipped yet.” In fact, that’s STILL what my receipt says. By the third week of December, people were posting all over social media about their new LPU 16 packages, yet I still hadn’t even gotten a shipping update for my order from the previous year. I Tweeted at Lorenzo again on December 18th, asking about this. He told me to send him an email at LPUHQ. Screenshot of the Tweet: 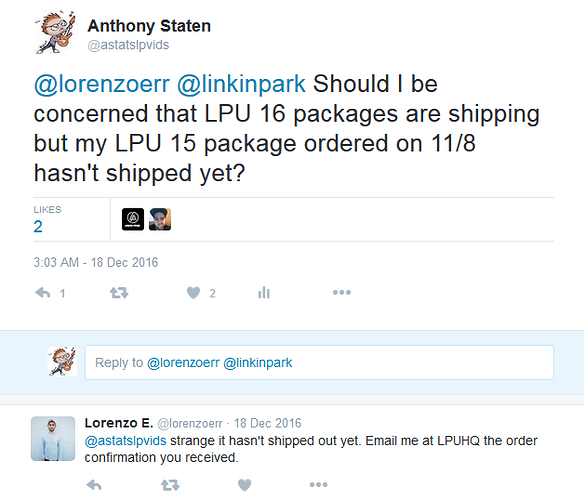 I emailed my concerns to LPU HQ later the same day. Here is the entire body of the email I received in response shortly afterwards:

"Thank you for contacting LPU HQ!

Note that the final line of the email was highlighted in bright yellow. I wasn’t particularly surprised by this, as this has not been the first time Lorenzo has specifically told me to email him at the LPU HQ email address, only to receive a response telling me to seek help elsewhere (this happened previously when I couldn’t access the LPU sub-forums after LPU 15 launched - I was told to email LPU HQ, and when I did, I was immediately redirected to Ground Ctrl support). Whatever, I thought, I’ll give it a little more time and see if the situation resolves itself, because I don’t want to deal with getting the run-around, and maybe they’ll get back to me eventually since it says “limited support hours” for the holiday season, not “no support whatsoever.”

After a couple more days had gone by and I still hadn’t gotten any kind of update, I emailed the Fullscreen Direct support email I was referred to on December 21st. I explained the situation in as much detail as I possibly could. The following day, I received this response. Again, this is the entire body of the email:

Please give me a moment while I look into this for you.

I “gave her a moment,” alright…in fact, I gave her 5 entire days, and I never received any kind of follow-up. I sent one more email on December 27th asking for an update, and I have yet to receive any kind of response whatsoever.

So it has now been nearly TWO MONTHS since I ordered my LPU 15 package, and I have yet to receive any kind of shipping confirmation. All of the items on my receipt are still listed as “not shipped yet,” despite there being numerous people who ordered LPU 16 packages several weeks after I ordered my LPU 15 package who already have their stuff. I’m used to LPU orders taking a couple months to ship, but clearly something isn’t right here, and all of the support avenues I’ve been pursuing over the past several weeks have been completely useless.

I don’t want a refund, I don’t want special treatment, I just want my damn stuff, or for someone to at least respond to my inquiries in a useful manner.

It is kind of a busy time of the year, in the past I’ve gotten responses from LPUHQ and Fullscreen Direct almost right away. Regardless, this still seems unacceptable.

You’ve been a member of the LPU longer than I have so you probably know what’s more appropriate for sending multiple emails to LPU support, but I would try to contact them again if I were you, especially Fullscreen Direct, because by the sounds of it, it seems like it’s a problem on their side

I would like to see the @lpuhq to get in motion in this case… not the client… service at clients important, esp. if they are good soldiers soo long! ! But as I know, all the guys at HQ are seriously doing their best,so they sure solve it for you…would be nice if ya report ya solution as sucess inhere very soon! KEEP THE FAITH

Is it possible they shipped the package without updating the status? And maybe it got lost?

Same problem, I ordered my LPU 16 package day after it was released and to this day I have no informations about shipping, in my web receipt is still “not shipped yet”. Adam was definitelly way better coordinator…

@astat is talking about LPU 15, not 16. If you actually meant 15, too, that is probably something you should have brought up with support long ago. If you did mean 16, then it really hasn’t been very long. I only got mine two weeks ago.

Regardless of which year you meant, it’s pretty unfair to imply Lorenzo isn’t doing his job correctly due to a process he has little control over

well anyway, the truth is, there are bit too much “issues” this year, delayed delivery, my other problems with order, account transfers (and people with lp.com accounts who have acces to lpu members only sections) I don’t know who is responsible, fullscreen, wonderfull union, coordinator?

Define “issues” please. It’s not really the HQ"s fault people don’t read their emails and failed to activate their accounts or redeem their LPU membership. Shipping is also something the HQ cannot control.

@robbles Well you can decide to call ya money back then… or stay proud, moaning normally not a soldiers attitute - hahaha - we do descisions and stand them…

btw: if you compare the error rate of amazon maybe, proportional, of course - hahaha

ya’ll surley see that it is an average problem! Wish ya the best and on another note: My own oder, the lpu16 pack- is meanwhile still on it s way to me too…

Still remembered the time when it was the local post office that changed the tracking number; no wonder it couldn’t be tracked.

So sorry for the inconvenience! Right now we are experiencing issues with the site. As soon as we get things back up and running as they should be I can get back to you with an update on your order! Sorry about that! We are working hard to get that order out to you.

I emailed them again on Dec 28, but I haven’t heard back! I’m worried that an error have made it so that someone else has received my package that I booked!

We’re talking about LPU 15 here, not 16. Give them time for 16, it’s been like a month since they started shipping packages.

Define issues? Alright then. Today I recieved my package and t-shirt is missing, instead LPU 8 CD they send me LPU 13 CD and half of shipping adress was printed in russian cyrilic, no wonder i take so long…Pretty disappointed this year.

you don’t have to read this, dude

Please! You moaning under a wrong topic about ya case… go lift ya energy on the right ways and call hq… this my last post…

If you received a wrong order, just email them and they will sort it out. Also, keep in mind that the minute the package leaves their facilities, delivery is not something they can control, it’s up to the post office services of each country.

I’m gonna send off another email (to both addresses I’ve tried previously) on Monday if I don’t hear anything else. I’d assume everybody will be back from their holiday breaks by January 9th…right? Granted, I work for a company where the only day I’m guaranteed off all YEAR is Christmas Day, so maybe I’m underestimating how lenient things are around the LPU HQ/Fullscreen Direct offices…

Update: As of today, ten whole weeks after placing my order, I’ve finally received a shipping confirmation. Sheesh. Now fingers crossed that it actually gets here, and that the correct items are included…