My first concert was 10 November 2012 at the FNB Stadium in Johannesburg, South Africa. It was my first live concert, and such an awesome experience.

My first concert was 6 June 2007 at Olimpiskiy Moskow.And it was my B-day.That was the best present for me. It was the first time when LP visited my country. It was great. So im waiting for the next concert which will take at Olimpiskiy in august 2015. Russians fans waiting LP so much!

My first concert was 24th of November 2014 in London. After fourteen years of waiting I finally had a chance to see them live! It was the best day ever!

Oldie for me. First for me was in 2000 when they opened for POD in NYC. I think it was the Kings of the Game tour.

My first concert was in 2003 during the Projekt Revolution tour. Man… I didn’t realize it was so long ago. I’ve actually never been to another, since they never came back to my city after that one. I’d love to see them again some day.

That was actually also my first concert in my life, so it was particularly amazing. I was up near the stage, and when they were getting close to the crowd it was crazy how compacted it got up there. I’ve never been to a concert since that was as packed as that.

It was a really good concert

My first concert was 2008 in Hannover, Germany. Unbelievable. Linkin Park in my hometown. Like a dream.

My first LINKIN PARK concert was in september 2012 in MTV WORLD STAGE MONTERREY, It was sooooo awesome watch them! Sing all the song that for years I only dream about it! When they sing IN THE END all the Arena Monterrey was singing with Chester and Mike, OMG!! it gives me goosebumps when I remember that amazing day, definitely a dream come true

and I only have to wait 19 days more to see them for second time!! 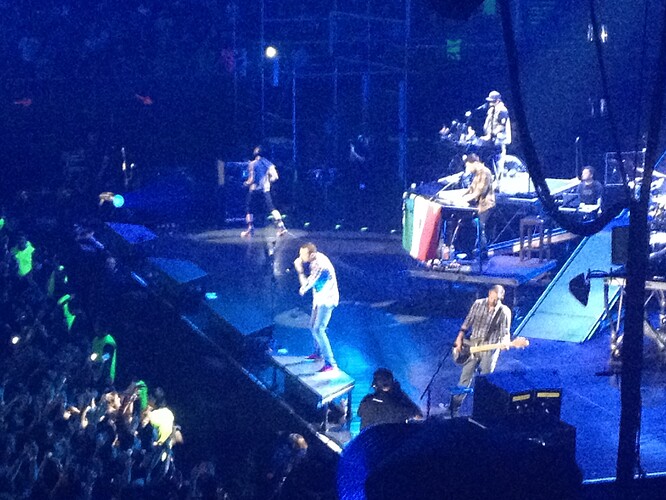 i was 6 years old

i was 6 years old

Wow that’s awesome I wish my first concert could have been that long ago I didn’t get to see them until my senior year of high school in 09’.

My first concert was in 2007 in Hamburg Germany

anytime your first LP is is a good time

My first concert was in Poland - Wroclaw 5.6.2014 and I saw them after this in Amsterdam - LPU summit, Vienna, Italy, and Poland again.

Guys, my first LP concert will happen on November 1st during the Monster Mash festival in Tempe Arizona. I can’t wait!

My first concert was a day before yours