One Step Closer - another demo version?

I have specifically joined this forum to ask this question.

Prior to Hybrid Theory being released, when I was around 13 years old, I remember recording a version of ‘One Step Closer’ from the radio to cassette tape. It was played on BBC Radio 1, I can’t remember what show I recorded it from specifically, but quite possibly Steve Lemacq’s show.

At the time I did not know who the song was by or what it was called, I just knew I liked it, and I would listen to it often. A few short months (or weeks?) later, I was in my local music shop browsing the metal section. I saw Hybrid Theory in the ‘new releases’ part, looked at the tracklisting, and saw a track on there called ‘One Step Closer’. Assuming this was the song I recorded from the radio, I bought the CD on a whim.

Well, luckily it turned out it was the same song by the same band, but the version I recorded from the radio was different! Unfortunately, I either lost the tape or eventually taped over it…

Years later, I have been trying to find this demo online. I found the ‘One Step Closer’ demo called ‘Plaster’, however I am pretty certain that this is NOT the version I taped from the radio.

Here is what I can remember about the version I recorded, that differs from the original (and ‘Plaster’)

No electronic drums in the intro / interlude. No drums at all in these parts of the song.
When the first heavy riff kicks in after the intro, there was an elongated ‘AHHHHHHH!’ scream from Chester, different from the ‘Shut up!’ scream in ‘Plaster’.
In the chorus, the ‘one step closer to the edge, and I’m about to break part’ was just Mike rapping, it didn’t have Chester’s voice underneath. I remember when I got Hybrid Theory, that I thought this part sounded way worse the way it ended up on the album.
I don’t think the interlude had any scratching in at all from Joe (but I can’t remember for sure about this. I think at the very least, the scratching was different, or there was scratching in different parts of the song rather than here, but I am less sure about this than the above points).

Does anyone know anything about this version of ‘One Step Closer’? I can’t seem to find anything online. As it was so long ago, I’m starting to wonder if my memory has failed me.

First of all, I am praying that may such a demo exist and come out soon.
Secondly, I think it is unlikely that a sample or a demo tape would have been played the day you recorded the song. Maybe you just heard a radio edit, but trust me, you have got me super excited.
http://lplive.net/wiki/db/lists/list-of-known-demos

OSC on the radio before HT was released?

It was just a suggestion. I mean, it is a possibility because the song was released before the album. Also, given the circumstances, which seems to be a better possibility, OSC radio edit played on the given day or an unreleased demo of OSC?

Wasn’t Stryker the one that first played OSC on the radio?

Please don’t suck me into technicalities. You know I don’t know about the band as much you guys do.

I don’t either, that’s why I’m asking. I really thought Stryker was the first to play the song on the radio, ever!

I remember reading somewhere a while back that there was a “Rock Mix” (not sure how the original wasn’t considered “rock”) that was slightly different, but I could never find somewhere to listen to it. It for sure doesn’t sound like any of the demos we currently have, so it might be that

I assumed that OP had gone through all the singles released.
The rock remix appears in the USA Radio CD. But, it’s a very close replica of the final studio version and doesn’t feature the scratching in the Shut Up part. (Enjoy it here)
The radio edit I am talking about is from Humble Brothers remix CD. It has 3 versions: Extended, FM Edit and LP version. But the Humble brothers did it for Reanimation, there is little to no chance of listening to them in 2000. 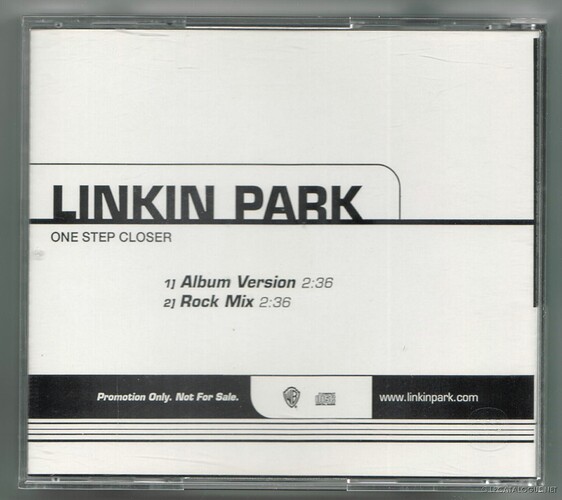 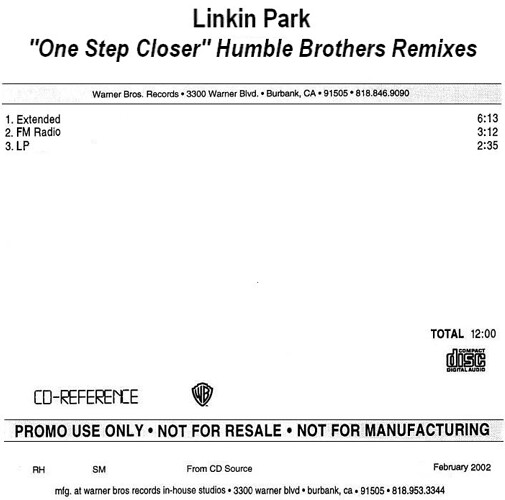 Wasn’t there a “Rock Mix” included in the European single of OSC?

Seems to appear only once. I only have a UK copy of OSC single. I don’t even know if a European CD was ever there. (I am considering UK to be separate from Europe for this conversation).
http://www.lpassociation.com/music/discography/

Thanks for this, maybe the ‘Rock Mix’ is the version I heard all those years ago.
As it has been 16 years since I taped the song the from the radio, maybe I imagined the other differences.
The version I thought I heard, I’m quite sure that I remember Mike calmly rapping ‘takes me one step closer to the edge, and I’m about to break’, rather than the dual-vocal screamed/shouted version we hear in all the released versions.
But again, maybe this is my memory playing tricks on me. It may have been that I was using a crappy stereo and one of the channels was not coming through properly (it was a very low budget stereo).
Anyway, thanks for all of the replies guys!

LP played BBC Radio 1’s Evening Session in January of 2001 and performed 4 songs live-in-studio: Papercut, Points of Authority, In the End, and One Step Closer. The first 3 were later released as B-sides on various singles, but other than the radio broadcast (which is uncirculated among the LP community), that recording of One Step Closer was never reused for any other purpose.

What you just described is an EXACT description of what One Step Closer sounded like when performed live during that era. I guarantee what you heard was the Radio 1 live performance of the song and mistook it for a studio recording (easy to do, given the lack of an audience - the recording of Papercut from this same session erroneously circulated as a demo version for nearly a decade). The fact that you remember this being pre-Hybrid Theory’s release can be attributed to the fact that Hybrid Theory wasn’t released in the UK until January of 2001, despite coming out the prior October in the States.

Shame you no longer have the audio, because as I said, that particular recording of One Step Closer hasn’t been tracked down by the community in the years since.

You have made me very happy

Btw, how do people even find out the PL after 14 years? Where do they find the details?
Also, BBC1 has a feature which can provide a list of songs that they played in the last 1 week. Sadly, it doesn’t date back to 2001

Amazing, that’s a great discovery! This must be the version I heard. Unfortunately I threw all my remaining cassettes out years and years ago, so even if I didn’t tape over it (and I’m pretty sure I did, like a fool), I have no way of accessing it.

It’s more than likely that the BBC still have the recording in their vaults, they pretty much keep everything they’ve ever produced. Maybe one day they will play it again as part of a Linkin Park retrospective or something. Or perhaps a fan who recorded it when it was first broadcast will re-discover their tape one day. I live in hope

And as for me believing that the recording was a few months before the album was released… well, it’s probable that the album had already been out for a little while before I had found it. This was before I even had the internet at home, so I didn’t always find out about albums being released straight away! So while the album came out in Jan 2001 in the UK (I’m guessing around the time that show on the BBC was broadcast), I probably didn’t buy it until February or March maybe.

Astat knows his stuff! that’s for sure!