New Versions of No Roads Left and Shadow of the Day

As many people might know, Linkin Park has released a Studio Collection as well as iTunes Masters recently. Those alone aren’t too exciting, but after some listening, it has been found that there are new mixes/versions of No Roads Left and Shadow of the Day. No Roads Left now has a loop of the drums from the end of the song earlier in it, Shadow of the Day has strings instead of synths. I personally do not like either of them, but here both of the are, uploaded by a member of LPLive.net

I would love to hear just the strings alone in either song, but they sound alright. I like the originals better.

I don’t like both version, they are too much different from the originals.

I’m kind of wondering why they did this at all. Why not have just re-released the tour edition with the other two bonus tracks it had along with No Roads Left? Kind of weird they added Across the Line as a bonus track as well…Is this version of Minutes to Midnight it physical print as well or just digital format? I also don’t care much for that sound they added in No Roads Left, it was better off with out it. Shadow of the Day still sounds good, but not as good.

Edit: Wow, they also added the Crystal Method Remix of Points of Authority to Hybrid Theory’s deluxe edition and My December and High Voltage are no longer album only on iTunes. A live version of Step Up is also on the deluxe edition of Meteora. To top it off, the deluxe version of Reanimation has been completely pulled off iTunes. This is too weird.

Cause we know the songs by heart now, the changes are a bit … weird to hear at first. But it is not too bad. Though I do prefer the original songs, cause I know them by heart.
But I am glad they still experiment and give us some new stuff during their carreer. I really like that about LP.

I use to think something similar, but I’ve thought that incorrect now, since I like most of the demos of full songs that have been released, but I don’t like these new mixes. So it’s not completely just what I was use to

The new version on No Roads Left sound really nice. I don’t know if it’s better, but sounds good.

“Linkin Park - No Roads L…” The YouTube account associated with this video has been terminated due to multiple third-party notifications of copyright infringement.

Mate, this is a 5 year old thread

OMG I didn’t even realise! I tried looking at the videos and saw this

And then checked the comments

I love the the shadow of the day 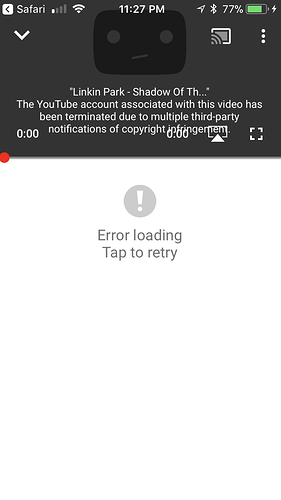 Mate, this is a 5 year old thread

Same for you soldier @wyattbeav !

These “new” versions were included on iTunes a few years back, you can probably still find them on there 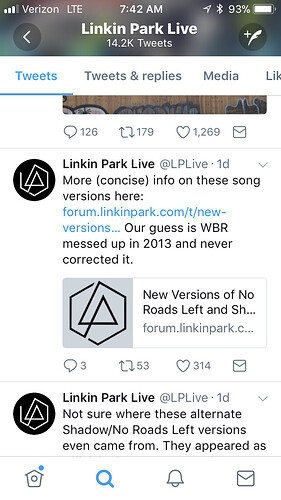 Not my fault though

Yeah, I think LPLive screw up there if that’s a recent tweet. I got that information from LPLive at the time (which I mentioned in the post) and wanted to share it with the LPU forum. This was before I was a moderator