I wanted to post this topic to read stories from all of you on what it was like meeting Chester Bennington. Was it a good experience? Was he a nice guy? I figured that we can all share and enjoy one of the happiest moments of our lives from meeting the man himself.

). I just want to read everyone’s experiences with meeting him in person. If you guys don’t mind you can share pictures too if you want to! I figured it could help not only make myself feel better but to also help other people on here as we’re all going through the grief of losing him.

I can’t wait to read them all!

I’ve met him twice. First time was at the Amsterdam LPU summit, but since time was running out during the M&G I didn’t really interact with him. He came by quickly to sign my stuff just like the other band members did.
Second time was at the OML special event, also in Amsterdam. There Mike and Chester took time to talk with us and take pictures. I shook hands with them both while thanking them for everything. Chester said “you’re welcome my friend”. He seemed so happy and relaxed. Due to meeting these guys twice, it was definitely harder to process the news of July 20th.
I will forever cherish these moments and I hope to meet the band again in the future!

That was really nice @rickvanmeijel

Here’s my story of meeting him - something I’ll always cherish.

I had an accident at their concert and got my nose broken and was knocked unconscious. One moment I was so happy to be at the the very front clinging to the barricade taking photos and the next thing I remember was being carried out by a security guard to the emergency clinic. After I had recovered a bit, I was upset to realize that I had missed most of their show.

Once I was released, I ran backstage to meet the band with the rest of the LPUers. I was so embarrassed because my face was a bloody mess, but I also didn’t want to miss the opportunity to meet the band. I told myself – what if I never get this chance again? I’m so glad I made that decision, because I never did.

Chester was the band member who stopped to talk to me and sincerely asked me how I was doing and what had happened – he was just so sweet and caring. I had several photos I wanted the band to sign, and since the signing limit was one, I grabbed one and held it out to him. He looked at me and whispered, “give them all to me – I’ll sign and pass them down – let’s see how far they get”. His kindness instantly made me a Chester fan for life. I remember walking away thinking ‘what an awesome guy’. Now 17 years later and I still love him and the band as much as when I first heard them.

I was so excited to see them again in Texas…I was counting down the days. But, now, instead of being so happy, I am heartbroken. It really helps reading these great stories though.

Wow! That was an amazing story. When I met him in 2014 during the Carnivores tour, he was one of the sweetest and most generous person I met. We both hugged each other, Both my sister and I were very excited that day. This is a moment I will always cherish. I too will miss him always.He had not only the most amazing voice, but had a great heart and sense of humor too.

what a lovely story. I have been fortunate to see LP several times in the uk and was at Birmingham at his last concert. Unfortunately i was never able to meet the band.

Being a longtime member of the LPU, I’ve been able to meet the band four different times.

My first meet and greet experience was in Boston on the A Thousand Suns tour. Once the meet and greet started and we went through the line, I wasn’t star-struck at all. It was more like…meeting friends you’ve known most of your life. Linkin Park definitely has a laid-back environment when it comes to meeting the people that support what they’re doing, and Chester certainly was no exception.

My second time was in Mansfield, MA on the Honda Civic Tour. This time, the band was in much higher spirits, maybe the change in seasons had something to do with it and we were outdoors this time, I don’t know. Everyone in the band was eager to meet everyone, and Chester was at the end of the line with the biggest smile on his face.

Three days later I attended my first Summit in Camden, NJ and by the time the band joined us later in the day (after Joe had us play rock, paper, scissor for everybody’s money), and they performed beautiful acoustic renditions of ‘In My Remains’ and ‘The Messenger’.

After a quick Q&A with everybody came the meet and greet,and I had the whole band sign my back around my tattoo.

During the Carnivores Tour, I had the opportunity to attend my second Summit in Darien Lake. Linkin Park came to greet us with an acoustic rendition of ‘Final Masquerade’, followed by the Q&A. All I remember as far as Chester goes, was telling him to “have a good show” - and that infectious smile of his. He really was a beautiful soul.

The first time I met Chester was the day after the 2003 VMAs (8.23.03) in NYC. He came out of a yellow cab with a cast on his arm. Looked like he just came from the hospital. I spoke to him a little bit. He seemed like he was in pain.
The second time was for the Meteora World Tour at Nassau Coliseum (1.18.04) toward the end of the concert, he came down to the pit, he went to the right side first, then Mike said what about this side? He went towards my side and literally stood right in front of me! The crowd surge was crazy that I felt myself going under so I grabbed onto his left arm and squeezed it. Then he told the crowd to ease up, he then performed the rest of APFMH right in front of me. I found the video on YT. Its blurry but I remember it clearly.

The third time was for the MnG at Mohegan Sun (8.12.12). He was the last in the MnG line and I told whats Chester, he said he was all good. I wished a good show.

The last time I saw him was in May (for the surprise show at Grand Central). Man was he smiling 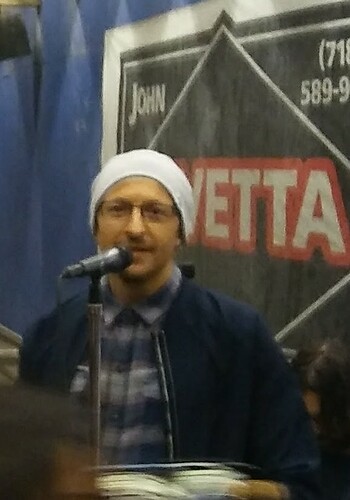 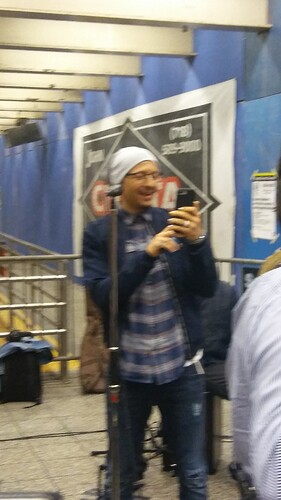 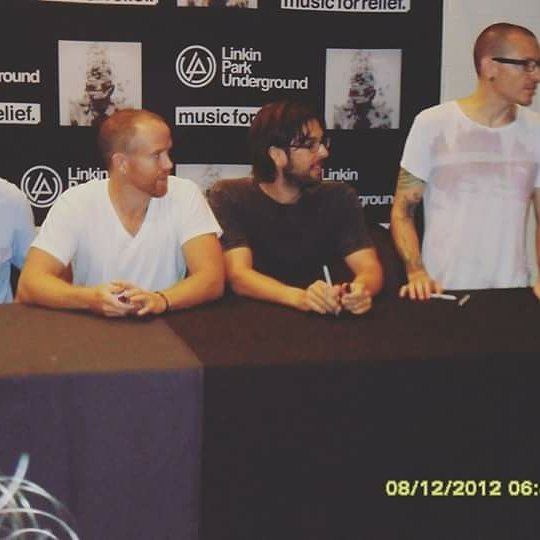 Freaking cool memories!!! What chester wrote on your back?

“No matter how far we’ve come, I can’t wait to see tomorrow”

I was lucky enough to run into him or meet him on…five occasions. I also had him get down in the crowd where I was at least three times. I got a MG in Vegas the first time I met him and I gave him a silly little letter. The next day we drove to LA to see them again. He noticed me in the crowd at the end and shook my hand and said he read the letter and appreciated it. He shook my son’s hand from the stage. He punched my other son in the arm…lots and lots of good memories. We were very lucky. Here are two specific stories I shared on Facebook on the day he died…

This first story is just a silly little one but I love it. One time when I was driving my youngest son home from daycare when he was about four he told me that a kid in his class had a mohawk. I said that was pretty cool. He then asked if he could get a mohawk. I told him he certainly could, if he wanted one. He seemed to be considering it but let it go. A week or so later when I was driving him home he said, “Remember that kid in my class with the mohawk? His dad has mohawk, too. Do you think you could get a mohawk? We could both get mohawks and be like them.” I laughed and said that I didn’t think a mohawk was my thing but he could totally get one. That was pretty much the end of the mohawk conversation. A couple months later we were at the school Christmas shindig and who walks in but Chester Bennington…with a mohawk. And his son has a mohawk. I did a pretty good job of not having a fanboy freakout but I did say hi to him and told him the story. I told him he was making it hard for me to be a cool dad. He seemed to be genuinely amused by the tale and it was fun to share it with him.

The second one is actually my wife, Diane’s, story. She got to meet LP a couple of years ago in Vegas. When they do these, they usually have everyone spread out around the edges of the room and then each guy walks by and says hi and signs stuff. Diane was standing next to a girl, about thirteen or fourteen. When Chester came around the girl was super shy and nervous but was able to tell him something that only he and Diane could hear. She said that she had a few rough years in her young life in which she had been constantly bullied. That other kids told her she was ugly and should kill herself. She had been in a very bad place and then LP put out the song Iridescent. She listened to it constantly and it helped her get through that time. She wanted to thank Chester for making it and helping her survive. He gave her a huge hug, kissed her on the cheek, whispered something in her ear, and turned to Diane and said, “Who in the world would call this girl ugly?! Isn’t she beautiful?” By that point Diane and the girl were crying. Chester moved on down the line and that was that. I suspect that meant a lot to her. I hope she is alright, today.

Reading your stories makes me feel so broken. I’m happy you guys met Chester and i believe you’ll keep these amazing meetings in your memory forever.

Thanks so much for sharing those fantastic stories!

I try, i try… Thanks, darling.

What an awesome story! I can totally envision him walking into the daycare party and just hanging out. Cool stuff!

Wish I could’ve been there. And I meant to set my DVR for their appearance on GMA too. Also I would have loved for them to have performed on The Today Show. I mean think about Al Roker and the rest jamming along while the band performed. again, not to sound like a broken record, but one of the perks about being famous, is all the TV appearances you can make.