Little story with Mike and Chester

Ok, I was inspired by this picture and i wrote little something. I hope you are going to like it 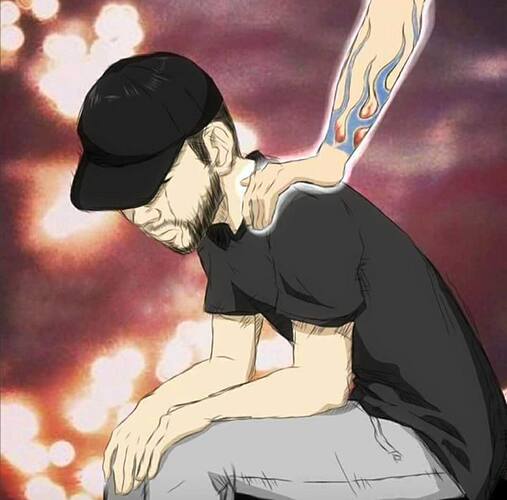 One moment he is happy, playing with his kids, the next thing he knows his whole world is ruined.
His best friend, his brother is not there anymore.

He always thought that Chester will reach out. They all knew about his demons, about all the bad things that were in his life since forever. They were sure that in case of dark and painful times he will call one of them or just say something. But he didn’t. He just decided he wanted to stop the pain and he’s done the only thing that came into his mind.
Mike was getting ready for the photoshoot they had booked later on that day. It was Joe who called and said that Chester was dead. Learning the truth was like someone ripped Mike’s heart out. There was nothing for a long moment; just darkness and silence. Mike thought that he stopped breathing for a while. He thought that there’s nothing around him anymore. Just the pulsating pain he felt in his heart. He couldn’t believe his brother [was] gone. He was there for him, anytime he wanted to talk. Just one phone call, one message and he would’ve been there for him. And so was the rest of the band. But now… now it was over. Now Chester was gone.
Now, almost three weeks later he came to the studio. Last time he was there he had Chester with him. They were talking about some band stuff and, as always, Chester was joking and being just himself. This crazy man.
Mike smiled a bit, remembering his friend. Then there came the realisation that he will never joke with Chester again. He will never see him again, he will never hear him sing and do silly things. That is in the past.
He sat on the chair and looked at the computer screen. Unfinished Linkin Park songs, a few demos and some recordings. They will never be finished. They will remain the same, untouched, unfinished. Chester will never come in and finish them.
Mike turned his computer off. It was too much to handle at the moment. He stood up and decided to leave.
But he couldn’t.
The tears came so suddenly, he couldn’t leave the room and face his wife and kids. They were worried about him anyway.
He sat down on the couch and hid his face in his hands.
Breathe in, breathe out.
He gave in, the sadness took over.
Mike wasn’t sure how long he was like that. All he knew was that at one point the tears stopped and he felt like someone lifted this heavy weight from his heart. Like there was this invisible hand resting on his shoulder. Like someone was comforting him.
And somehow he knew. Somehow he felt the presence of Chester in the room. He could almost see him standing there, smiling and telling him to pull himself together. He could almost hear this contagious laugh that Chester had. It was always hard to not laugh when Chester was around.
And now Mike felt his presence in the room. He knew that Chester is looking after him and he is trying to make him feel better.
Mike blinked away the tears. He felt a bit better. It wasn’t like he felt great, he was still devastated and heartbroken, but feeling Chester’s presence helped him a little.
Slowly he moved towards the exit. Before he closed the door, he turned around. A vivid image of Chester playing his guitar on the couch crept into Mike’s mind. Chester was smiling and making up the words to one of Linkin Park’s songs. He was looking so happy. Full of life and full of ideas. Whole life ahead of him.
Mike smiled a little and closed the door behind him.

Somewhere in heaven Chester was smiling at him.

The way you wrote was hard to read for me. I liked the end. Peaceful, beautiful, hopefully and can make anyone smile. Thanks for sharing.

What do you mean hard to read? As in style and grammar?

Layout I’d guess, just space out the paragraphs like they were in the preview you sent.

I am trying but this forum is weird

Emotionality speaking. I felt the sentiment in each word.

there is one more light still shining in your story, and it guides not just Mikes way on - nice one Rory

You’re making me cry again. But don’t worry… they are happy tears. Im pretty sure that Chester really just out there, watching over his friends and family.

really heart breaking post. hope Mike and the rest of the band are doing fine

Reading your story I dropped a few tears, imagining the situation…
Honestly there was a part I didn’t like very much (“He just decided he wanted to stop the pain and he’s done the only thing that came into his mind.”), I just don’t think that happened, I don’t think he “decided” anything. I mean, the Chester who did silly things, who was laughing and joking all the time, I don’t think that guy could ever do that, not the guy who always encouraged people to talk about their problems. I think that it was a moment of weakness, he let his guard down and the demons took the chance to completely destroy him. I don’t know, it’s not like I want to upset anyone by saying this, but I just don’t like it when people talk as if it was his choice, because I think that if the choice had been his, he wouldn’t have done it.
Anyway, I really liked the story, it’s very moving, thank you for sharing it

Crying from this post I can finally listen to LP now and also did a song in Spanish One more light feeling beyond happy.