Oh, you’re so lucky. I’m the girl with the short hair right in front of Mike. I’ll ask my friends and see what they say.

So my friends that want to go all have to work this weekend, but if you set it up, just let me know where and when and they said they’ll try their best to go.

I am thinking on Friday 28th outside MGM Casino at 6:00pm. I can bring candles…

I have at least one friend, Jenny, who thinks she should be able to go. Maybe you should try to make it a public even on facebook or something?

Yes, I just created one. You can find it on Facebook as “Chester Bennington tribute Las Vegas, Nevada”.

This is the link to the event page! Redirecting...

I invited a lot of my friends from Vegas. I hope they can make it!

Thank you so much! I received requests to change the date for September 2nd, so I did, I really hope they can still make it. Thank you!

Why sep 2? That seems so far away…

My husband and I live in Vegas. We will be there!
We all need each other through this difficult time.

We will also be attending the ones at Burbank, Ca (Warner Bros) and L.A 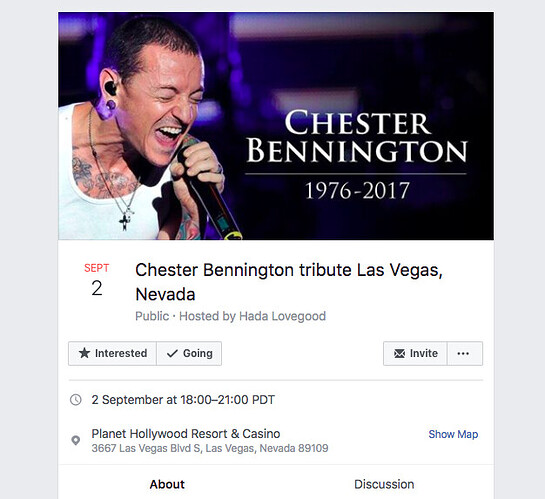 Thank you, I will!

Because that is when they were supposed to delight us with a concert here in Vegas and I received many messages from people asking to do it on that day, due they flying to Vegas for the concert. Thank you!

I’ve watched the memorial on FB and I’m so thankful for the memories of Chester.
It made me cry and laugh. So great stories.
You can watch it on “Grey Daze” FB-Site
https://www.facebook.com/realgreydaze/videos/1993345607563811

Does anyone see the speech of Ryan? Wow…heartbreaking

i actually have the eulogy recorded on my phone. i talked to him after when he went over to club tattoo and he’s so kind. he hugged everyone and took pictures and we talked about how hard dealing with the whole thing has been. he stayed meeting people for about 2 hours i think, the whole thing was really healing tbh

I’m SOOOOOO bummed I don’t live in Vegas anymore and didn’t have the opportunity to go to this. Ryan’s eulogy was so moving. I, too, was laughing and crying through the whole thing. I would’ve definitely given him a gigantic hug. Even though he’s a rock star and performing and being on stage is nothing new, it still takes a lot of guts to spill all your emotions like that in front of a room of strangers, about something sooooo personal. Lyrics are something else because they can be abstract and everyone in the audience relates to it in their own way, but telling personal stories like that, even just the shame that he felt that maybe he could have done more (the part where he really broke down), that tore me up because I know that’s what we ALL think, that we could’ve done more, but I’m sure those closest to him feel it the worst.

Thank You everyone!!! We will forever #MakeChesterProud

Who is ready to listen to the new album today with Mike?..