So it is over, so let’s jump into it and start with the final table 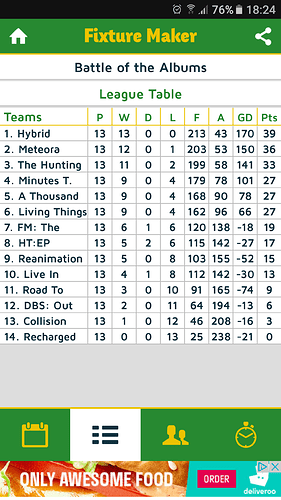 So my review of B.O.T.S:B.O.T.A
So it was a close battle right up until the 2nd to last, but I guess we all predicted which album would come top and which would come last
Over all it was fun to see these all go toe to toe

The Unbeaten Award: Hybrid Theory (13 wins)
The Biggest Loser Award: Recharged (13 loses)
The Biggest Shock Award: Recharged, because I expect this album to get zero votes, but it actually recieved some votes
The Biggest Disappointment Award: This was a hard one, but I think for me it is gonna be Reanimation and the reason is I expect it to finish 7th at least

Last but not least, what’s next for B.O.T.S
Well I was think a B.O.T.S: Battle of the Music Video?!?

What do you think?!?

i was hoping, that ATS and THP would win more…

I love the new idea

I did concider LPU albums next

Maybe after B.O.T.M.V
And that one will be elimination type of league
Or maybe a random generated knockout tournament

I really like your battles, thanks for making these all the time!

Video battles is a good idea I think

I think music videos is a great idea!

I will put up details of B.O.T.M.V in due course

Im surprised than M2M got that high.

Battle of the videos would be great, I like this idea