This is my first post, and is definitely with a heavy heart as we are all suffering the loss of our hero.

I have been an avid fan of Linkin Park since the beginning but never got to see a show. I was finally going to the one in Minneapolis when I saw the horrible news that Chester left us. I feel so robbed.I have finally stopped crying and am trying to just focus on the incredible legacy Chester has left for us… as well as his amazing smile

I thought it only appropriate for my first post that I include in this thread my tribute to Chester… in words, anyway. I plan on getting a tattoo, but that’s for another post.

I look forward to catching up with all of you here as we work through our loss.

Love and light to you all. 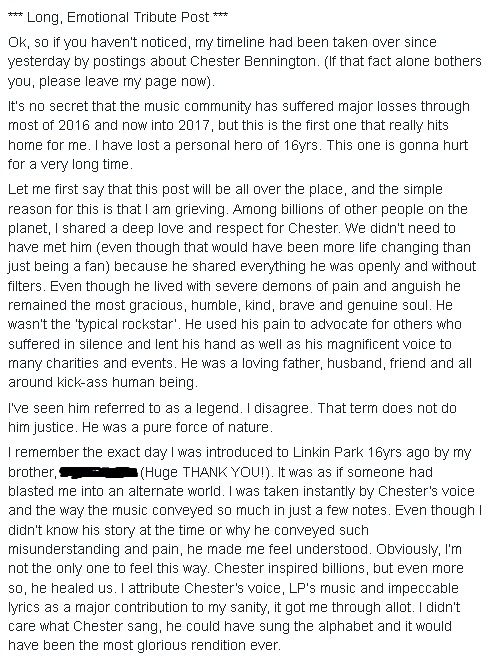 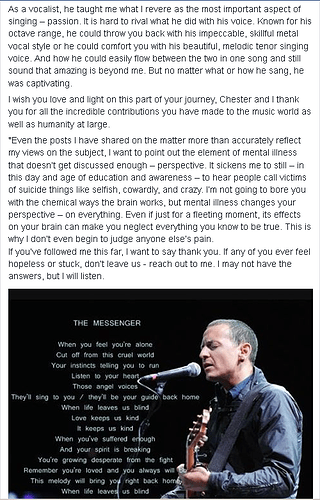 Welcome! Nice to meet you here!

Hope you will enjoy stay in here…!

Thank you, same to you.

Did I put this in the wrong place?

No,it’s fine! I said that so you could know things better!

if you want, feel free to join us in discussions or games…

Great, I’m new to this. Lol

I will do that! Thanks again

Hey Hilary. I know what you mean.

Welcome soldier. Hope you have a good time.

Thanks do any one still feel that isn’t real ?

That was beautiful… thanks so much for sharing this…

I love linkin park so much .i truly hope they are doing good. I know in my heart they are okay . I just miss chester and i know they miss hem too

What you posted was really beautiful. I was an LP fan since 2000, and an LPU member since 2012. I was a trial member in 2011. But became a full fledged member when the Honda Civic Tour came. I attended three shows. My first was 2/4/11, I won a radio contest to score tickets. It was the one that would air on Fuse TV before it stopped playing music videos. My other two were in Camden NJ in 2012 and 2014. the latter where I finally won my first meet and greet,that both my sister and I attended. and we both got two parts of the inside sleeve of “The Hunting Party” CD signed by all six members. And I even got to hug Chester. This is a moment I will always cherish. I felt like a kid on Christmas morning. I was instantly won over by his voice from day one. I first heard “One Step Closer”, and I believed that this was a band that would be going places win or lose.The selling point for me was “Crawling”,cause that was when I realized he really could sing. And not just scream, but the melodic verses just sent chills, and I was like “Okay, that’s it! As of now I am a massive Linkin Park fan, and I love Chester’s voice!” I brought every CD every release day, and I listened alot. I voted and defended the band every time they were up for an award. I would DVR every TV appearance they make, I kept dreaming they would do alot more TV appearances cause that was one of the perks of being famous. I was really as upset and devastated as you were when Chester died. I wanted this only to have been a false news story and he was okay, or at least getting help. I mean I could deal with the headline “Chester treated after suicide attempt”, or “Chester messes up national anthem” but not this. I felt like a piece of me was taken away from me. When news broke, I was in denial, and I kept denying it until I watched Entertainment Tonight. That moment I then just bawled all night, it was like I was reliving the day that The Challenger Space Shuttle blew up and when 9/11 happened. I always get upset when someone dies, but when it comes to celebrity deaths, this is one that is impossible for me to recover from. It’s difficult for me to picture LP without Chester cause they go together like Bert and Ernie.If you think about the analogy.Anyway, regardless of what happens to Linkin Park in the future, this is gonna be real hard for me either way. I mean I will always support them no matter what, as I have been from the very beginning. But do understand that it’s gonna be much harder without Chester.

Of course, I figure if there’s anywhere I’m going to be understood on Chester’s value, it will be here.
Definitely not inferring ANY lack of Value for Rob, Mike, Brad, Dave, and Joe - they are equally amazing.
The combination of those guys was/is pure music magic

Same. What’s comforting is that those guys have allot of support. In fact, in my lifetime, I have not seen an artist so grieved as Chester. That speaks volumes. He gave so much love and now we are giving it back … even if from a distance in our hearts.